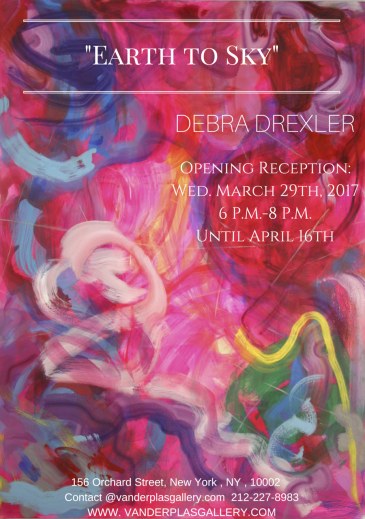 Commuting between Hawaii and New York, Debra Drexler thrives on living at the edge of two oceans. Hawaii has a unique form of tropical light diffused through blazing skies, resplendent with colors so intense that they can seem almost synthetic. New York has its own urban pulse with twenty-four seven illumination, flashing the frenetic energy of a city in constant motion. Luminosity and movement permeate Drexler’s large, abstract canvases, with vibrant, electric color. Her work is equally informed by these two opposite geographies combining the sublime natural beauty of Hawaii with the diverse dynamism of New York. The connection exists through light and color of one earth and one sky.

Debra Drexler maintains studios in both New York and Oahu, and has had 30 solo and over 100 group exhibitions at galleries and museums in New York, Hawaii, Australia and Berlin. Her last solo exhibit at Van Der Plas Gallery was in 2015. Drexler is also a Professor of Drawing and Painting at the University of Hawaii and has been deeply involved in the critical conversation surrounding the current resurgence of abstraction in New York. She co-curated, with Liam Davis, the survey New New York: Abstract Painting in the 21st Century, which is being exhibited at The Curator Gallery in New York from February 23-April 15, 2017.

“I believe in the primacy of painting; painting is enough. Painting stands on its own. Abstraction takes us to a state of timelessness that is primal in its humanity, disconnecting us momentarily from the mediated ‘now’ of our electronic devices, and connecting us to a ‘now’ that gives us a glimpse of the infinite.”