Preston Spurlock, at the Living Gallery Tuesday July 18th 7pm – 10pm. Featuring a selection of recent drawings, collages, animations & glitch art – it’ll all be there, it will all be on sale. 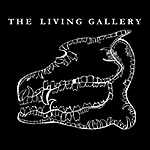