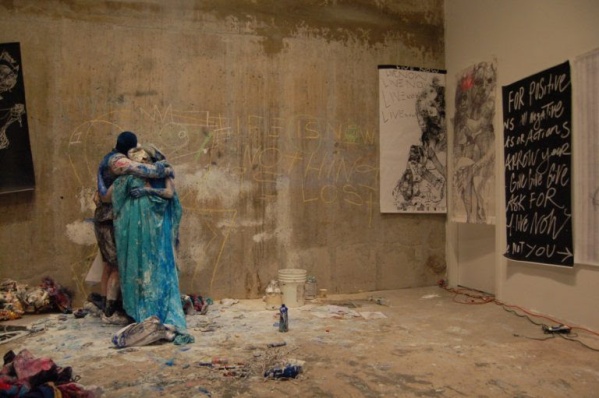 Michael Alan’s solo exhibition entitled Mind Body Sound consists of a selection of large scale drawings and ninety six playing cards. The drawings build on Alan’s unique mark making language and his obsessively compulsive practice and need to capture everything and everyone —the living. While often gestural and dysmorphic, his drawings are painfully exact in form. Distorted and delicate lines come together with splashes of color to articulate the fleeting moment of now —Alan acts as a reporter of daily life.

In conjunction with the drawings, a selection of ninety six playing cards will be on view, a selection from a series in which the artist has worked on for more or less twenty year. Alan grew up attending baseball games with his parents every weekend, and began collecting playing cards at a young age. Years later, as an adult artist he began to paint and draw on the cards, transforming each card into a unique work of its own. Unusual and fascinating, Michael Alan; the young collector of playing cards, reworks and transfigures his childhood collection into artworks which await a new collector. An Encyclopedia of baseball games, the work recalls the quality and scenes of Don DeLillo’s Underworld.

Michael Alan was born in 1977, in Bushwick, New York. His work has been the subject of 9 solo exhibitions in New York, and has been included in over 200 group exhibitions both nationally and internationally. In addition to his work as a multi-media artist, Michael is the founder and director of the Living Installation, where human beings are transformed into unique, living art objects. These happenings are set to Alan’s original music, which is recorded featuring artists such as The Residents, Tommy Ramone, Ariel Pink, and Meredith Monk. The main goal of the project is reinforcing that humans are living installations by creating a space for people to open up, come together and are all equal through the process of creating art.