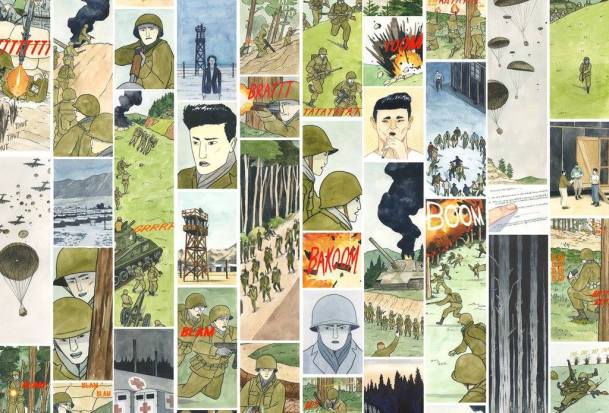 Giant Robot is proud to host the return of Rob Sato at GR2. 442: Original Art From The Graphic Novel Featuring the work of Rob Sato. Opening reception Saturday April 14 6:30pm – 10pm. Show to run April 14 through May 2, 2018

The exhibition showcases the original illustrated comic panels from a graphic novel titled, 442, each hand-painted in watercolor. 442 refers to the 442nd Regimental Combat Team, the heroic, segregated unit of Japanese American soldiers who fought for the United States in World War II. Despite 120,000 Japanese Americans being placed in concentration camps, thousands volunteered and fought in Europe and served in intelligence services in the Pacific.

Saturday, April 21, 2018 3:00 PM –
Rob Sato will tell his own family’s story in relation to the art work. Sato’s grandfather was interned in the Jerome and Rohwer, Arkansas camps and served in the 442nd and he’ll delve into this fascinating history. Also speaking will be Diana Tsuchida who has embarked on a collection of interviews with Japanese Americans who lived through the Internment Camps under the moniker Tessaku Project.

About Rob Sato:
Rob Sato is an artist and writer based in Los Angeles. He makes complex, idiosyncratic work that explores diverse themes often related to time, memory and transformation. He is best known for his unique watercolor paintings and paper sculpture, working in an organic style that is both wildly loose and meticulously detailed. An inventive and category-defying artist, he layers autobiographical, historical, and fantastical narratives together to create thought-provoking works that traverse the realms of absurdity, humor, horror and beauty. In 2005 he received the Xeric Grant to publish his graphic novel “Burying Sandwiches,” and his work has been featured in Giant Robot Magazine, Hi-Fructose Magazine, Juxtapoz Magazine, and New American Paintings.