Mission accomplished! Ciudad Real is an example of social inclusion through art and a large open-air museum thanks to the collaboration between its Provincial Council, Laborvalía and Ink and Movement.

And this is just the beginning. . . The artists, locations and dates of the next artistic installations which will forever change the landscape of La Mancha will be confirmed soon.

The fruit of the collaboration between Ciudad Real’s Provincial Council, the Laborvalía association and the creative team of the artist Okuda San Miguel, Ink and Movement, the project was kicked off this past April 1st, thanks to which the province will now live on as a cultural transformation that will go down in history for the region: ‘Titanes’.

The plain of La Mancha will become an obligatory destination for art lovers after completing the first stage of ‘Titanes’. For José Manuel Caballero Serrano, President of the Provincial Council of Ciudad Real: “This is a cross-cutting project that manages to unite social inclusion, the commitment to urban art and the recovery of our rural heritage. The province is now an open-air museum in which our towns are part of the works. The people with disabilities who have taken part of the project are our true “titans”.

Six silos have become art thanks to the participation of 12 relevant artists of the international contemporary scene – representing 5 countries: Spain, Brazil, Mexico, Belgium and France – invited by Okuda San Miguel. ‘Titanes‘ aims, in Okuda’s own words, “to change, through art, society’s image of people with disabilities“. Therefore, hundreds of members of the association for the inclusion of people with disabilities Laborvalía have lived with the artists themselves at the foot of the silos, helping to paint the silos and enjoying of other activities.

As in La Solana, where the Brazilians Bicicleta sem Freio wanted to represent “the power of creativity and imagination” with their mural “Os Gigantes de la Mancha“, which covers the four faces of their titanic silo. Or Okuda himself, who in Calzada de Calatrava (Pedro Almodóvar’s hometown) transformed his silo into a polyhedral and colorful mural in which he has integrated “some characters from Almodóvar’s films together with local references such as the Templars or Don Quixote”. His work is entitled “Legends from La Mancha“.

Along with them, the Belgians Hell’O, who have managed to give an “optimistic, pop and fresh touch” to their silo in Malagón; Daniel Muñoz together with Spok Brillor, with a mural that celebrates his 15 years of collaborations and “reaffirms the building from an architectural point of view“; Equipo Plástico, in Manzanares too, and his homage to “the tonalities and patterns of the adjoining lands, their textures and nuances”; or the Mexican Smithe, together with Alicante’s Demsky J., who in a new transatlantic collaboration entitled “Parables of Thought” have unified their styles in the Corral de Calatrava silo. 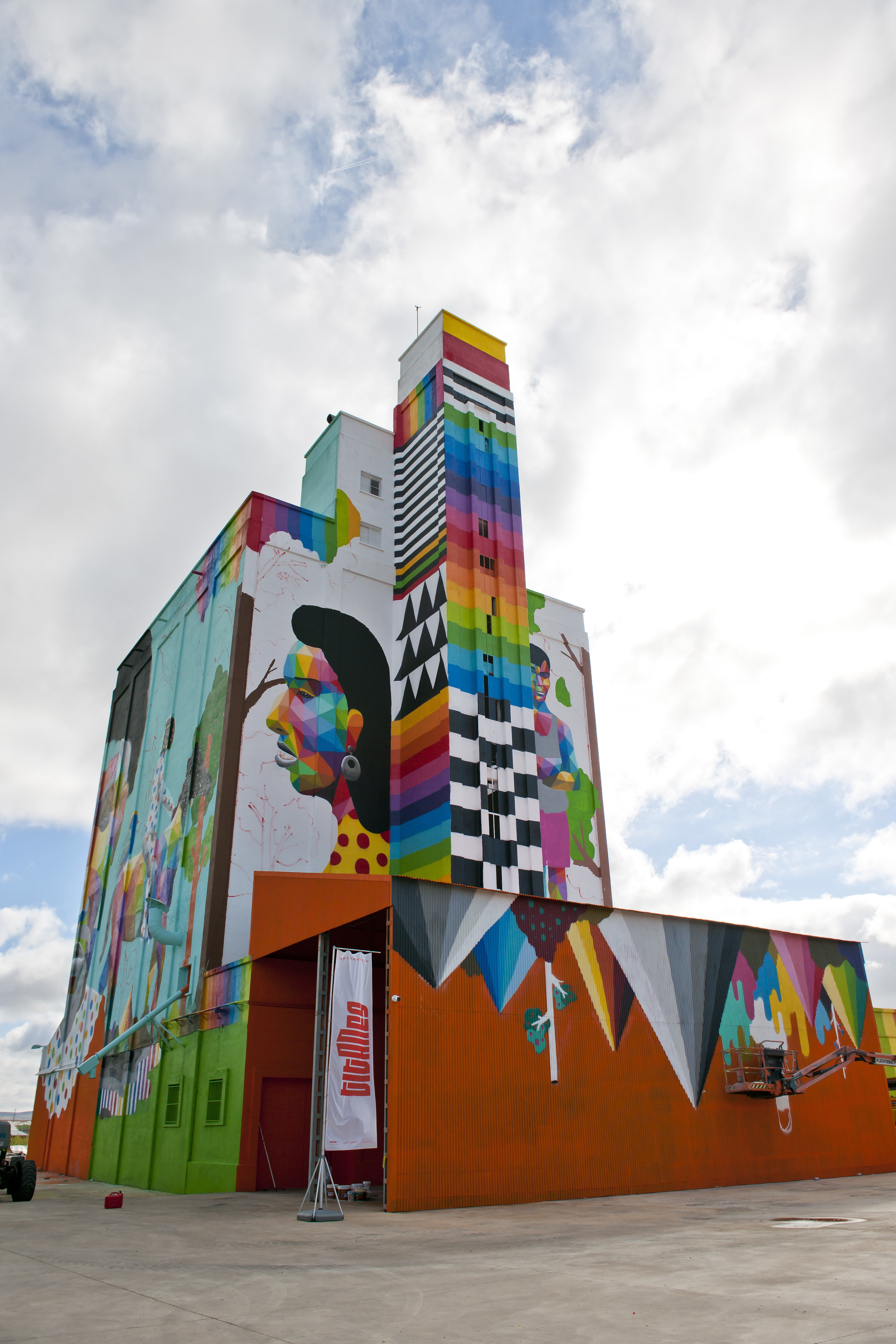 This installation has coincided in time with the 15th anniversary of the celebration of the first urban art festival on large formats in Barcelona, the ‘Urban Art‘ held in 2004 in the Canary Islands. The event, organized by Ink and Movement under its former Pluralform brand, became a pioneering encounter of this genre within and beyond Barcelona’s borders. 15 years later, many of the young artists who participated then are now returning as heavy hitters in this new historical milestone, ‘Titanes‘.

Photos of the entire project are available to download ​here.

Thanks to Okuda & Zigor @ Ink and Movement, Laborvalía, Rivera & Donas and all affiliates for the images.